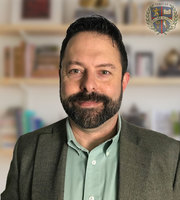 Erick Barrett is a graduate of the University of Tennessee with a Bachelor of Science in Aerospace Engineering. He also holds a Master of Divinity from the Southern Baptist Theological Seminary with an emphasis in Family Ministry and Biblical Counseling. Mr. Barrett has served as the Upper School Department Head for Highland Rim Academy, a classical Christian K-12 school, where he taught math and science and coached robotics. Mr. Barrett has additionally taught in numerous cooperative efforts and individual tutoring environments. He has served in positions with Target Corporation, Honeywell Aerospace, and with the U.S. Army and has served as pastor for two churches. Mr. Barrett currently serves as a Chaplain in the U.S. Army Reserve. Mr. Barrett resides in Cookeville, Tennessee, with his wife Lisa and their three children, Cassidy, Allison and Andrew. He and his wife homeschool their children and believe that children should not only have a complete and rigorous education, but that it should be grounded firmly on a biblical worldview.Mr. Barrett enjoys soccer, hiking, building, math, and anything that allows him to spend time with his family.