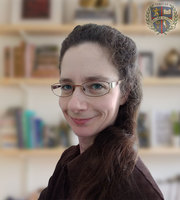 Rachel Lott has spent the last fourteen years working in university-level education, both as a tutorial leader and an administrator. She initially trained in philosophy (BA), then medieval studies (MA), and finally medieval philosophy (PhD), the latter two at one of the field’s leading research institutions. During the pandemic she began teaching middle school students online and found a new passion. She is now thrilled to be part of the Veritas Scholars Academy community. Having been raised Baptist, she is eager to blend rigorous academic training with the riches of the Christian intellectual tradition. Her favorite non-academic activities include being servant to a cat named Minnie and being wife to a man who enjoys both philosophical theology and fine woodworking.