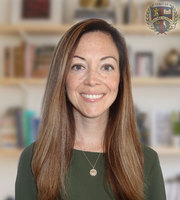 Lisa Lushenko is an experienced educator and military veteran. She has served in various teaching and tutoring roles for over twenty years, while living in eight states and three countries. Lisa studied Elementary Education at the University of Pittsburgh, where she first earned her B.A. in 2004 and later her M.Ed. in 2012. She served the U.S. Army as a military intelligence officer from 2005 to 2009, deploying in support of Operation Iraqi Freedom. A teacher at heart, Lisa enthusiastically returned to the field of education and taught in both public and private Christian school settings, gaining experience across multiple grade levels and subject areas.

In her spare time, Lisa enjoys cooking, hiking, and traveling. She also spends a lot of time with her standard poodle named Zoey, going for walks and playing fetch. Lisa has been a lifelong believer in Christ. Growing up in a Christian home, she regularly attended church and was actively involved in youth programs. At the age of twelve, Lisa rededicated herself to Christ and chose to be baptized as she strengthened her faith. Lisa is an Army wife and is currently stationed in New York. She lives with her husband, Paul, and their three daughters Evelyn, Madison, and Sydney.