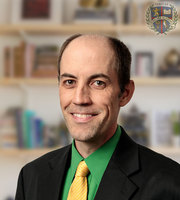 Martyn Ellsworth began his career as a youth minister in southern Illinois. He spent several years in youth ministry and has served as a pastor since 2008. He has over two decades of teaching experience gained primarily in church staff positions but also from online teaching. Mr. Ellsworth currently serves as pastor of Emmaus Road Baptist Church in Ewing, Illinois. He studied at Union University in Jackson, Tennessee, where he earned a Bachelor of Arts in Christian Studies. He later earned a Bachelor of Science in History at Southern Illinois University in Carbondale. Mr. Ellsworth enjoys reading theological and historical books. Some of the historical periods he enjoys reading about are the Protestant Reformation, the Civil War, and World War II. He is an Andy Griffith Show fan and a bit of a baseball historian. Mr. Ellsworth came to faith in Christ as a young child. He grew up in a Christian family and learned a great deal about the Bible from his parents. He and his wife, Rebekah, have two children whom they homeschool. Together they enjoy playing games, watching cartoons and taking trips to visit family members.