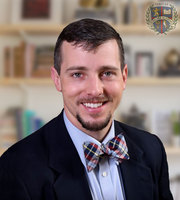 Joshua Butcher began teaching classically in 2010 after earning a BS and MA in Rhetoric & Public Affairs, eventually abandoning his dissertation to focus more fully on classical education. Since 2010 Mr. Butcher has been privileged to construct and teach three rhetoric courses, as well as collaborate to construct and teach a senior thesis course and integrated humanities (“Great Books”) courses. A devotee of the classical life, Mr. Butcher strives to embody the virtues venerated and displayed throughout the Classical Christian legacy. When he isn’t reading books, Mr. Butcher enjoys playing outside with his wife and five children and exploring God’s Creation and the fascinating ingenuities of man throughout history. He also enjoys roasting coffee and sharpening knives. Mr. Butcher was raised in a Christian home and has remained a professing and maturing believer in Christ throughout his life. He married Hannah in 2007, with whom adopted Josiah (14) and Jeremiah (13) in 2008. Joshua and Hannah have since received from the Lord, Ezekiel (2010), Ezra (2013), and Evelyn (2016).