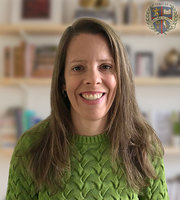 Dr. Jessica Whisenant began her career teaching ancient Near Eastern history and biblical Hebrew as a graduate student at the University of Michigan and briefly at the University of Oregon. She has led numerous studies on the texts of the Old Testament at several churches around the country and in Germany where she currently resides. She combines this experience with archaeological field experience at sites in Israel, Jordan, and Syria. Jessica earned her BA studying British history and French language and literature at a small liberal arts college in Tennessee. She went on to earn an M.A. and then a Ph.D. in Ancient Near Eastern studies at the University of Michigan in Ann Arbor. In her spare time, Jessica loves to head to the mountains to ski in the winter and hike in the summer. For fitness (and fun!) she plays competitive tennis. She is also an avid reader and would rather listen to audiobooks than the radio in the car. Born and raised in Oregon, Jessica has lived in a variety of places around the country and the world because of her husband’s career as an officer in the U.S. Air Force. In all of these locations – even in northern England and in southern Germany – the Lord has blessed her and her family with opportunities to grow spiritually in Christ at each church of which they have been members. Jessica and her husband Rob have three children. She supplements their curriculum in German schools by homeschooling them in English grammar, World history, and the Bible.