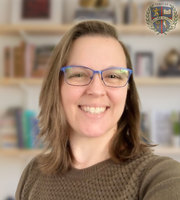 Carrie Bennett is a fifth generation teacher who is passionate about all things having to do with language and children. She began her career as an educator in 2004, teaching music in the church and in private studios before moving into the public school system as a fourth grade teacher. Since then, she has continued to teach music even while she classically homeschools four of her seven children. Carrie has been teaching children how to read and write since 2009, and it was her love of language that spurred her on to pursue education. She has a Bachelor’s degree in Music and Bible from Columbia International University and holds a Master of Arts in Teaching early childhood and elementary education, also from Columbia International. She enjoys reading, playing and writing music, playing games with her children, and spending time outdoors with her husband. She had the privilege of growing up in a Christian home and accepted Christ as a young girl. She and her husband Jason have seven children, five of whom still live at home, and they are raising them to know the Lord at a young age as well.