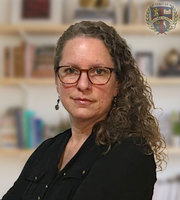 Esther Veldman has been teaching for most of her adult life both in the classroom and at home. It all began at a small church school in Ontario where she taught and tutored children from grades three to twelve. She has homeschooled her children for ten years and taught piano lessons for the last nine. Finally, she has also been teaching at a small French Christian school in Quebec. Esther earned a Bachelor of Liberal Arts at the University of Waterloo, Canada, in 2010. She enjoys painting in oil and acrylic, listening to classical music, sewing, reading, camping with her family, and bird watching. She believes that Christian education is fundamental to bringing up our children “in the fear of the Lord.’’ She and her husband, Meine, a pastor and professor of Reformed theology, have seven children, three of whom are adults. Their home is in the French-speaking province of Quebec, Canada.