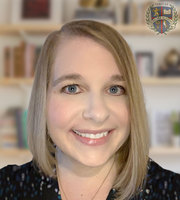 Amy Kleespies is an Army wife who has lived and taught in six U.S. states. After completing her B.A. in Music Education with an emphasis in vocal music, she spent six years teaching performance arts, music theory, intro to music, guitars, and vocal music to hundreds of intermediate and middle school students. Not long after achieving her M.A. in teaching and learning, Amy and her husband prayerfully decided to begin homeschooling their two studious children. From there, she was involved in a plethora of homeschool groups as a leader and teacher including teaching English grammar, writing, math, literature, and Latin using a classical Christian approach.

Amy LOVES learning and can be frequently found reading in her sunroom, listening to audiobooks on walks in the hilly bluffs of Wisconsin, pouring over Latin, cross-stitching gifts for family and friends, or playing/singing at one of her two pianos. As a family, the Kleespies love board games, escape rooms, camping, hiking, snowmobiling, music in general, and a weekly Friday Night 'Popcorn and a Movie' tradition! Having grown up together in Minnesota, Amy and her husband were excited to move to Wisconsin. After many years of living around the United States, Amy now spends the Wisconsin winter in multiple layers next to the fireplace, desperately attempting, in vain, to thaw. Amy finds that God always provides opportunities to shape young minds! She is passionate about teaching and has wanted to be a teacher ever since 1st grade after realizing she likely wouldn’t become the first female president. She believes every student can reach goals higher than they can even perceive! “Shoot for the moon. Even if you miss, you’ll land among the stars.” – Norman Vincent Peale. Through God’s grace and with prodigious energy, excitement, and engagement (and a bit of humor), Amy will inspire, motivate, and encourage students to reach their utmost potential.