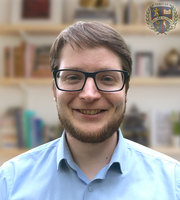 Scott Cartwright grew up with missionary parents and learned from a young age the importance of faith in every aspect of our lives. Born in London and raised near Glasgow in Scotland, Scott grew to love the rich history and beautiful landscape of the United Kingdom. Following in the footsteps of his grandfather who received a physics degree from Oxford and served as an engineer in World War II, Scott always felt drawn to Physics, especially when seen through the lens of Christianity. Throughout his time at university and beyond, Scott sought opportunities to show others the beautiful language of Creation through the atoms and molecules God used to form the world. Scott earned a B.S. in Physics from the University of St Andrews in Scotland, graduating with highest honors. He is currently working on a Master’s degree in Military Aerospace and Airworthiness from Shrivenham Defense Academy of the United Kingdom. Scott’s passion for teaching became clear during his time studying abroad at the University of California, Merced. He gained practical experience teaching physics lessons alongside another instructor. His commitment to education continues through his work as a STEM ambassador in Wales and England. Over the past few years, he has presented in schools and at conferences, encouraging students to see the beauty of physics. His students benefit not only from his teaching experience, but also from his countless hours applying physics in the “real world.” Since 2016, Scott has worked with the Royal Air Force, helping to maintain Hawk TMk2 training jets in northwest Wales. Scott works as an aircraft maintenance fleet planning specialist to ensure the safety of men and women who devote their lives to defending freedom. Scott’s students will enjoy the unique experience to learn from someone both gifted at teaching and equipped to share practical ways physics can be applied in the world around us. During his time studying physics, Scott met his wife, Sarah, who has taught math and physics for Veritas since 2015. Scott has enjoyed watching Sarah teach these many years and has contributed to the development of her physics courses. His mother-in-law, Mary Wright, has taught math and physics for Veritas since 2012, and is a constant source of encouragement and inspiration. Scott and Sarah love their village of Cemaes Bay and hope to explore as much of the beautiful Welsh coast as possible. They are dedicated members of their local church, and their faith influences every aspect of their lives. In his spare time, Scott enjoys hiking and sailing. From his trek up to Mt. Everest Base camp to his work keeping military jets in the sky, Scott brings physics to life in his classroom, encouraging students to glorify God by enjoying His creation and using their talents in new and creative ways.