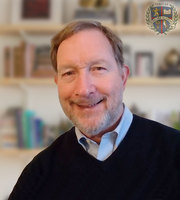 Randy Martin graduated from UCLA with a Bachelors of Arts in Philosophy followed by a Master of Divinity from Covenant Theological Seminary. Called to pastoring early in his career he has served churches in Northern Virginia, New Mexico, St. Louis, and California. Mr. Martin chaired the Biblical Studies department at a Christian college prep high school where he focused on Christian ethics, Christian philosophy, and the guiding of graduating seniors through their research projects. Currently Mr. Martin pastors a small congregation in central California and is an adjunct theology professor for a seminary in the Sangre De Cristo Mountains of Colorado. Since 2013, Mr. Martin and his wife Julie have experienced rigorous treks in the Sierra Nevada mountains that have included long rock climbing ascents, lengthy rappels down mountain cliffs, overnight hiking by headlamps, braving the El Capitan Alcove swing, and flying as passengers in glider planes. Having become a Christian in his youth, Mr. Martin’s passion has always focused on the defense and confirmation of the faith, channeled through pastoral and educational ministry. He has made Psalm 71:18 his biblical calling, to declare the might and power of Christ to the generation to come. With the future in mind, Mr. Martin and his wife Julie look toward a deeper involvement in the lives of their nine grandchildren, who are blessings from three of their four grown children.