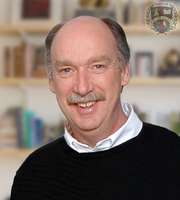 Tom Garfield, a Michigan native, has lived in Moscow, Idaho since 1977, largely due to meeting and marrying his wife, Julie, there. Their four children all graduated from Logos School; they and his 11 grandchildren are still his primary ministry. He was the superintendent of Logos School from when it began in 1981 until 2016. Starting in 2016, he serves as the President of LEAF (Logos Education Advancement Foundation), a consulting and training entity for classical, Christian teachers, administrators and board members. Tom has a BFA degree in Education and a Masters in Education Administration, both from the University of Idaho. Tom taught history, art, and directed drama productions at Logos School for over 35 years. He earned his Professional Superintendent’s certification from the Association of Christian Schools International (ACSI), and served as a founding board member of the Association of Classical and Christian Schools (ACCS) for 25 years. He is the author of Dear Parents, Return of Dear Parents, Putting Feet On the Trivium (for administrators), was a contributing author to Repairing the Ruins, and recently completed a history of Logos School entitled Non Nobis. Tom was a speaker at ACCS conferences for 25 years and directed the Logos School Summer Teacher Training for 23 years. He has consulted with numerous Christian schools and groups around the country. Since retiring from Logos School in 2017, Tom has opened Heritage Arts Academy in Moscow to train students and adults in the fine arts. He and Julie have been members of Christ Church since 1977.