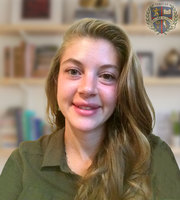 Anna Pinkerton graduated with a Master of Arts and Religion from Trinity School for Ministry in 2016. Her focus was in Church History and Theology, and she studied Literature and New Testament Greek as well. She loves languages, particularly Greek and Latin. Mrs. Pinkerton studied Latin during and post- high school and taught Latin for two years at a Classical Christian School in Boone, NC. She also taught Latin for high school-aged homeschooled students for several years. Mrs. Pinkerton grew up in North Carolina surrounded by a large immediate and extended family. She is now married to a wonderful man (whom she knew from high school) who is currently serving as an army officer. She and her husband William have a ten month old little girl named Mary and currently live in the beautiful state of Colorado. Baby Mary keeps her busy and entertained, but Mrs. Pinkerton also loves to read, hike, run, ski, play the piano, cook, host parties and drink a good cup of coffee.