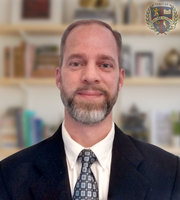 Damian Haarhoff (more commonly known as Sir Haarhoff the brave and noble) was born in Cape Town, South Africa, and moved to Namibia when he was three years old - which means that his students receive their instruction in a cool South African accent at no additional charge! He had many adventures growing up in Africa, including being chased by a rhino, running into (and then from) a herd of baby elephants, and a close encounter with a baboon . . . not all on the same day, that is! When missionaries from the U.S. started a church in his hometown of Windhoek, he became a Christian by the sovereign grace of God through the means of their ministry. When he was 18, the church sent him to Texas to study at Dallas Baptist University. One fine day in the midst of a required math course, his eyes were opened to how the glory of God is manifest in what he once thought were boring numbers, meaningless letters, and irrelevant formulas. He began to see more and more of how the perfections of God permeate the world of mathematics - how the beauty, order, precision, immutability and complexity of math was indeed a testimony to the very nature of the God by whom and for whom all things were made. As a result, he went on to earn a B.A. in mathematics as well as in theology with a minor in New Testament Greek. In addition to being a math teacher, Sir Haarhoff has been a pastor, counselor, Sunday school teacher, and karate instructor. He has taught math since 2000 and has had the privilege of working with a diverse group of students from disadvantaged to honors. He has taught everything from 6th grade math to Calculus II. He is happily married to his bride whom he met at DBU. They live out in the country in a small town called Cut-N-Shoot, outside of Conroe, Texas. They have eight adorable children, nine cats, a few chickens and a Great Pyrenees watch dog named Elsie. They have been homeschooling their children since their oldest could say the words "A says, a-, a-, a-pple." The Haarhoffs are faithful members of Crown and Covenant Reformed Presbyterian Church in Conroe, Texas. Sir Haarhoff loves working for Veritas, where he is committed to support and come alongside parents in their honorable endeavors to educate their children. Armed with a love for students, a passion for mathematics, and a ready supply of humor, he enters the classroom each day, ready to slay dragons of ignorance and apathy and rescue damsels of potential and promise. "What a remarkable privilege," he says, "to be able to bring my students on a daily basis to the grandest of all theater performances . . . to the very front row, where they will sit on the edge of their seats and behold the wonders of God unfold before their very eyes in the world of mathematics."