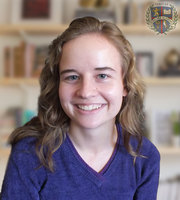 Sarah Cartwright has thoroughly enjoyed teaching for Veritas Scholars Academy since 2015, seeking to learn alongside her students about God’s beautiful creation. She has taught Algebra I & II, Precalculus, Physics I & II and Calculus II for Veritas, helping students make connections between the subjects. In addition to her many years of teaching experience, Sarah received a homeschool, classical, Christian education and thoroughly enjoyed learning through the lens of reformed, Christian faith. Growing up with a math teacher and a software engineer for parents, Sarah grew to love math and science. This lead to Sarah earning a B.A. in mathematics from the University of Nevada, Las Vegas (UNLV), graduating summa cum laude. Sarah was a National Merit Scholar, a member of the UNLV Honors College, and received the Bhatnagar Award given to the top mathematics major at UNLV. During her time at university, she worked with a team of faculty and graduate students on a mathematical modelling system, calculating the possible spread of Ebola. In 2012, Sarah was awarded a placement to study for a semester at the University of St Andrews in Scotland, where she met her husband, Scott. They now live on the beautiful north coast of Wales in a little village called Cemaes Bay. Scott is a fellow Veritas physics teacher and also works in aerospace engineering, helping to maintain the Hawk TMk2 training jets, ensuring the safety of many men and women who devote their lives to defending our freedom. Sarah’s mom, Mary Wright, also teaches math and physics with Veritas, and is a constant source of encouragement and inspiration. Scott and Sarah are dedicated members of their local church, and their faith influences every aspect of their lives. They love to travel, and thanks to Scott’s travel and tourism skills, they plan to see as much of God’s beautiful planet as possible. Sarah loves sharing connections to the real world with her students. In her classes, students explore the calculus of a Pringle chip (yes, it’s a real graph called a hyperbolic paraboloid!), the incredible mini magnetic robots used in medicine, the bioluminescent octopus, behind-the-scenes penguin stories from her biologist sister, physics problems starring her brother’s goofy huskies, and many live music demonstrations on her violin, demonstrating some of the math and science behind music. Sarah studied violin performance alongside mathematics at university and is now a member of the Blackpool Symphony Orchestra, performing in venues around northern England. She hopes to never stop learning, as evidenced by her ever-growing library! From the classic Herodotus to the new A Rhetoric of Love, students may recognize many familiar titles behind her desk. Whether through 3D printed turtle shells or the Fibonacci sequence in a sunflower, Sarah loves bringing math and physics to life in her classroom, encouraging students to use their talents for the glory of our Lord and Savior.