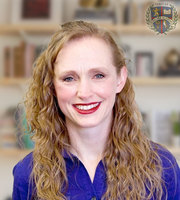 Jennifer Collender is the wife of Dr. Michael Collender and the mother of four little monkeys, Jackson, Benaiah, Isabella, and Elijah. She graduated valedictorian from Logos School and then from New St. Andrew's College with a Liberal Arts degree and an Education Emphasis. She taught numerous subjects for The Oaks Academy, an ACCS school in Spokane, Washington, including Latin, Protocol and Journalism, before having children of her own. She is now a very thrilled homeschooling mother. Before moving to North Idaho she was the director of Coram Deo Academy, a homeschool co-op based in Spokane, where she taught Logic, Omni IV, Elementary Geography, Protocol, and Creative Writing. She now teaches Rhetoric I for VSA and Elementary Creative Writing for White Horse Hall, a local educational institution. Her hobbies include anything related to children (except papier-mache'), even coaching her son's soccer team, though secretly she has never played a game in her life, but don't tell anyone. The team still doesn't know.