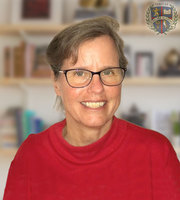 Mary Wright graduated with distinction from the University of Nevada-Las Vegas with a B.A. degree from the College of Math, Science and Engineering. She also obtained a secondary teaching credential from CSULB and taught secondary mathematics for the Long Beach Unified School District for four years before staying home with her three children. While teaching for the Long Beach Unified School District, she was selected as one of 40 teachers nationwide to attend a conference in Washington, D.C. sponsored by President George W. Bush for Disadvantaged Youth. Mary then homeschooled her three children through high school, predominantly using Veritas Press curriculum. She organized and invited many other children in her church to join her family in a math and science coop for their high school years. Her main claim to fame though is that her adult children all survived the Wright Homeschool. Captain Katie, her oldest, graduated from the Air Force Academy and is currently serving in Greenland. Sarah Cartwright, who also teaches for Veritas Scholars Academy, is a talented teacher and comes highly recommended for all your math and science classes! Lastly, Mary’s son Jonathan is the coolest, most talented mechanical engineer she has ever met. Mary does appreciate that she may be a wee bit biased when it comes to her children. Mary and her husband Harold have been married for over 30 years and actively serve in their church, Providence Reformed Church of Las Vegas. At this stage of their lives, Mary and Harold also spend much time in the care, comfort and encouragement of their elderly parents. They also enjoy camping in the seven national parks within a day’s drive of their home, hiking, biking on nice slopes (NOT negative slopes), rock collecting, backpacking, dogs (especially a Husky named Bear Bear and an Air Force beagle named Ziggy), reading together and listening to books together.