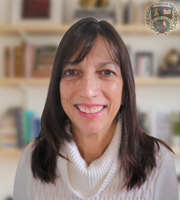 Mary K Andreades received a classical education at Holton-Arms School in Washington, DC and a degree in Fine Arts at Yale University. She had a career painting, sculpting, and teaching in New York City, and then assisted her husband, as he pastored a church for eleven years among the downtown creative folk of Greenwich Village. Having lived among the cultural gatekeepers and seen the damage they can do, Mrs. Andreades has a passion to train students to write the stories, paint the paintings and do the deeds that make this old world good again. She homeschooled four children through the Veritas curriculum and guided them as they went on to flourish as an animator, a debater, and journalist. In the same way, she works now to help her students flourish and find their own quests and callings. Mrs. Andreades has taught at Veritas Scholars Academy for six years. She also assists her husband, Sam, in counseling and speaking on topics surrounding gender, such as homosexuality and the Bible’s teachings about men and women. Mrs. Andreades loves to mentor students through the Omnibus curriculum, which provides a rich Christian philosophical framework along with plenteous opportunities for discussion and thereby prepares young people for winsome and wise engagement of the tough issues of our day. Mrs. A. teaches students to fight cultural monsters through writing. And red marks mean, “I love you.” Really! Have I mentioned that you also get to playact Shakespeare? That is just the best. These days, Mrs. Andreades has left the city and is now hiding out in a sort of wicked witch’s cottage in the middle of the woods in Eden Township, PA, where she can wave her sword around without scaring anyone, except the Amish farmers. She also has a brown belt and teaches Kenpo Karate, which is useful when students do not do their homework. Hyaah!