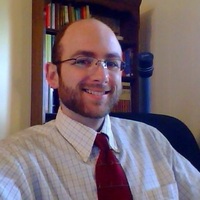 Rick Davis has been teaching in classical Christian schools since 2006. He studied in the honors program at Liberty University where he graduated summa cum laude in 2004 with a B.A. in Religion. In his college years, Rick spent time as a youth pastor and as a teacher assistant at Pactum Christian Academy in Lynchburg, VA. In 2006, he returned to Pactum to teach. Since 2008, he has taught a variety of courses for Veritas Scholars Academy including Omnibus II, Omnibus IV, Logic I, Logic II, and Rhetoric I. In addition, Rick has contributed essays and study questions to the Omnibus textbook series. He also wrote and taught for the self-paced Omnibus II Secondary Course, and contributed exercises to the self-paced Omnibus I Primary Course. He enjoys reading just about anything he can get his hands on. His particular interests include ancient and medieval history, archaeology of the Ancient Near East and Mediterranean, Medieval Literature, Biblical Studies and Christian theology. Rick and his wife Mary Beth are members of Providence Church in Lynchburg, VA and are the very proud parents of Luther, Anthea and Alfred.